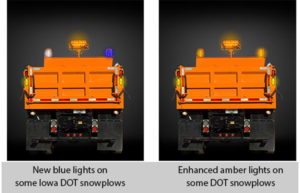 The Iowa Department of Transportation has installed flashing white and blue lights as a safety feature on the back of 220 snow plows.

“We find that about 75% of our collisions with snow plows are either rear-end collisions or side-swipe collisions,” says Iowa DOT director Mark Lowe.

There’s been a dramatic decrease in wrecks involving the Iowa DOT snow plows now equipped with those white and blue flashing lights on the back. Three winters ago, the agency’s snow plows averaged a wreck every 2,800 hours of operation.

However, last winter, the snow plows with flashing white and blue lights on the back had far fewer wrecks — about once every 8,800 hours on the road.

“With just the amber, it’s not as visible as the white and blue,” Lowe says. “I can’t explain why, but we know that it works and we’re cool with that.”

It costs about $500 to install the flashing blue and white lights on a snow plow. Legislation to be considered today in a state senate subcommittee calls for equipping the other 650 DOT snow plows with flashing white and blue lights.

Lowe says the lights can help reduce vehicle repair costs. For example, it costs $20,000 to replace the salt spreader on a snow plow if it’s damaged in a wreck. And, since snow plows are large, Lowe the costs for other drivers who collide with a plow are significant in terms of property damage to their vehicle and personal injuries.