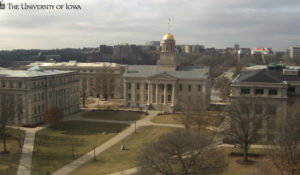 View of campus from the University of Iowa webcam.

A federal judge has ruled the University of Iowa must temporarily reinstate a Christian student group.

The school had pulled the student organization status of Business Leaders in Christ last year, saying the group violated the Iowa Civil Rights Act when it denied a leadership position to a gay student. Judge Stephanie Rose ruled the university must reinstate the group for 90 days, saying the school had used “selective enforcement” of its policy.

The group, which goes by BLinC, sued the university claiming religious discrimination. Group president Jake Estell talked about the issue following a court hearing earlier this month. “Campuses are supposed to be places that encourage diversity of thought and culture. But we stand here today because that is no longer true at the university of Iowa,” Estell said.

Estell said other student groups on campus are not forced to allow leaders who do not believe in the groups philosophy. “The university is treating us like second-class citizens because they don’t like our religious beliefs or that we ask our leaders to share our faith,” Estell says. “BLinC is open to everyone, and we want anyone to feel welcome to join us.” The ruling allows the group to participate in a student organization fair today.

The University of Iowa issued this response to the ruling:
“The court has ordered the university to restore Business Leaders in Christ (BLINC) to registered student organization status for 90 days. The university respects the decision of the court and has acted accordingly by extending an invitation to BLinC to participate in the student organization fair on January 24th. The university will not comment on the merits of the case per its policy on pending litigation.”