You are here: Home / News / Lawmakers may dramatically raise state fine for killing an eagle 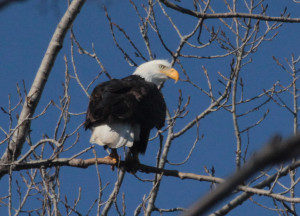 Forty bald eagles have been illegally killed in Iowa over the past three years, but the current state fine for killing the regal bird is less than the cost of most speeding tickets.

Baxter is sponsoring a bill that would raise the fine for killing a bald eagle to $2500.

“The intent of the bill I’m putting together would be (for) people who would intentionally ‘harvest’ an eagle,” Baxter says, “not something that would be accidental.”

Most of the cases involving the intentional killing of bald eagles are unsolved, according to state officials. Tammie Krausman of the Iowa Department of Natural Resources says the feds have handled the handful of cases that have been prosecuted.

“We just refer to the federal Fish and Wildlife Service for them to do since Iowa just has the $50 penalty,” she says.

The federal penalty is $2,500. Krausman says if Iowa’s penalty rises to that level, it’s likely these cases would be handled in state court.

Representative Baxter, a member of the “Sportsmen’s Caucus” in the Iowa legislature, says a $2,500 penalty for taking a bald eagle will hopefully be a deterrent.

“This is our way of saying: ‘We value our eagles in Iowa,'” Baxter says. “And we do value them and it puts some teeth to this and it makes a statement to the public and it’s a good thing.”

A three-member House subcommittee has endorsed raising the fine for killing bald eagles in Iowa. The proposal is now eligible for debate in the House Natural Resources Committee.

The number of eagles in Iowa swells from about 500 to 3,000 in the winter. State officials say that’s because eagles from Canada, Wisconsin and Minnesota fly down the Mississippi River, seeking open water to hunt.