You are here: Home / Crime / Courts / Legislators consider felony charge for use of credit card skimmers 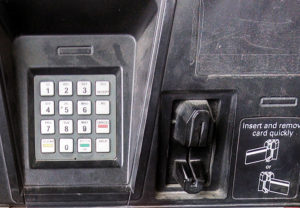 Skimmers are attached to legitimate payment systems like this one to try and get your credit card information.

Skimmers are illegally installed on ATMs, gas pumps and other places where customers insert a credit or debit card to pay their bill.

Representative Zach Nunn, a Republican from Bondurant, says prosecuting this kind of cyber crime is growing more difficult because the thieves are using “blue tooth” technology.

“As soon as they commit the crime, they’re able to erase all the evidence and there’s no traceable way we can track it back to the individual,” Nunn says.

In one instance, Nunn says a sheriff investigating this kind of theft took a skimmer into a police station. Someone showed up outside, downloaded all the credit card information and then wiped the skimmer clean, so there was no evidence left.