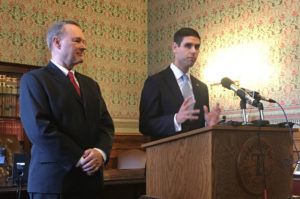 Iowa’s Democratic state treasurer and a Democrat who’s running for governor are promoting the idea of a new, state-managed “Retirement Savings Iowa” program for workers in the private sector.

State Senator Nate Boulton of Des Moines — one of seven Democratic candidates for governor — is sponsoring a bill in the legislature to create the program.

“This is an opportunity to do something positive for a lot of private-sector employees who do not have that right now,” Boulton says.

If Boulton’s bill becomes law, private sector businesses in Iowa that do not currently offer a retirement savings plan would be required to let their employees voluntarily invest a portion of their paycheck in a Roth IRA. Money in each of those IRA’s would be in the “Retirement Savings Iowa” fund and managed by the state, as is the case with the “College Savings Iowa” program.

State Treasurer Michael Fitzgerald says more than half a million Iowans in the private sector do not have any retirement savings.

Eight other states are managing a retirement savings plan for private-sector workers, according to Fitzgerald.

The Republican-led Iowa legislature is unlikely to enact the program here. Senate President Jack Whitver, a Republican, says the state doesn’t have an extra half-a-million dollars to cover the start-up costs for a state-run investment program, plus there are plenty of IRA accounts available from other vendors.