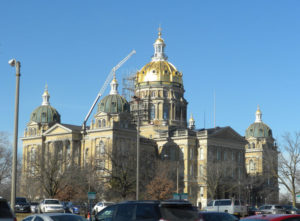 Republicans in the Senate have drafted a bill that would pare about $52 million out of the current year’s state budget. It includes nearly $25 million in cuts to the three state universities and 15 community colleges.

Senator Joe Bolkcom, a Democrat from Iowa City, says the cuts are necessary because former Republican Governor Terry Branstad failed to fulfill his promise to create 200,000 jobs and raise family incomes by 25 percent.

“Republicans like to talk about how they are doing this to Iowans because they are the adults in the room. That’s nonsense,” Bolkcom says. “Iowa families don’t manage their family budgets like this. If they did, they would be in bankruptcy.”

There are a little more than five months left in the current year’s state budget plan. Bolkcom says the nearly $20 million in cuts to the University of Iowa, Iowa State and the University of Northern Iowa will lead to higher tuition for students.

“When you have a bunch of people that don’t like government running government, here’s what the results look like and it’s not pretty,” Bolkcom says.

The Senate GOP’s plan does take into account about $12 million in extra tax revenue officials expect in the state treasury due to recent federal tax changes. Schneider, the Republican chairman of the Senate Appropriations Committee, says the overall plan provides a “cushion” of about one-half-of-one-percent of total spending, just in case state tax revenues continue to fall below expectations.

The Senate GOP’s plan cuts more deeply than Republican Governor Kim Reynolds proposed. Schneider says lawmakers want to make sure there’s no need to dip into cash reserves this summer to cover red ink in the state budget, something Reynolds had to do last year.

The budget-cutting proposal will be debated in a senate committee late this afternoon.