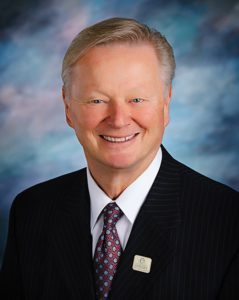 The leaders of at least three Iowa cities are in the nation’s capitol for the U.S. Conference of Mayors. The mayors of Davenport, Des Moines and Dubuque are attending the event.

Dubuque Mayor Roy Buol says one primary focus of discussion is about the Trump administration proposal to create jobs and improve our communities through a massive road and bridge construction proposition.

“We’re hopeful that this year, there’ll be some real action taken on that,” Buol says. “It’s a $5-trillion deferred need so we’re looking, hopefully, at some significant dollars that’ll be put into infrastructure.” Along with infrastructure improvements comes the need to be best prepared for severe weather issues, having everything from storm sewers to floodwalls in top working order. “Climate change is a major concern for every mayor and council in this country,” Buol says, and that’s another key topic being addressed.

“Depending on where you are, the effects are different, but especially in coastal cities where we’re having hurricanes and sea rise and flooding from rain events across the country,” he says, “just catastrophic weather situations.” The Trump administration lashed out at so-called sanctuary cities this week, communities that vow to protect immigrants in the country illegally from being deported. Federal officials are seeking documentation on whether local police and sheriff’s departments are hiding actions from U-S immigration officials — which is against the law.

Buol says Dubuque is trying to show itself as a “welcoming community.” “We’re definitely not going to be doing anything illegal but we’re trying to make a community of choice,” Buol says. “When you look at immigration from a city position, it’s really something that is critical to the future success, not only of Dubuque, Iowa, but of every city in this country.” He says it’s no coincidence that immigration is a hot-button issue at the same time communities across the country are struggling to find workers as thousands of jobs are going unfilled.

“One of the ways that is going to be remediated is through immigration,” he says. “People come to this country, like they always have, that have skills and education and they’re looking for a better life. They’re the people cities are looking to to help fill these jobs.”

The summit opened in Washington D.C. on Wednesday and concludes later today. Buol is among 250 mayors from across the country at the conference.