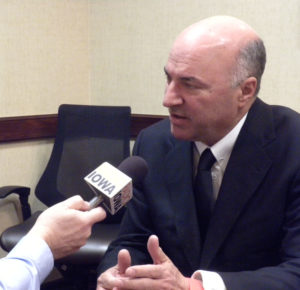 One of the investors in the popular television show “Shark Tank” is in Iowa today to give the keynote speech at the Land Investment Expo in West Des Moines.

Kevin O’Leary is a billionaire businessman who is one of the “Sharks” on the show who listen to pitches from entrepreneurs and then decide if they want to invest their business.

In an interview with Radio Iowa, O’Leary says he plans to share some of his business knowledge with the attendees.

“It’s a land conference and we’ll be discussing real estate for sure — but there’s a lot of entrepreneurs in that room and they’re interested in the trends that are going on in terms of management of businesses now,” O’Leary says, ” I’m going to bring a lot of that data with me, because I have over 44 of them now. So, I am able to identify good management practices versus weak ones.”

O’Leary says the big ag companies he invests in that supply fertilizer and seed to farmers have seen their margins go up every year while farmers are seeing their margins go down. He says farmers need to adapt some of the methods of those major companies.

“If you don’t know what the price of a bag of seed is in upstate New York and you’re buying it in Iowa, why don’t you know? Because those companies are playing a beautiful arbitrage on different pricing and they are taking advantage of every single algorithm they can with computer technology. There’s no reason farmers can’t do the same thing,” O’Leary says.

He says farmers could bring input prices down by sharing information. “If there was total transparency on pricing — in other words you knew what your competitor bought corn seed for in Champaign-Urbana for example — why wouldn’t you get the same price here. You wouldn’t because you don’t know,” O’Leary says. “They’ve got to be more cooperative in getting transparency in pricing, and that’s what I am going to talk about.”

He says getting farmers to adapt would help them make more on their operations. “I want every entrepreneur in America to succeed and every other large company is taking advantage of technology and farmers are not, and that makes not sense to me,” O’Leary says.

O’Leary — who is known as Mr. Wonderful  on the show — says this is not his first trip to Iowa and he is excited to be able to talk with landowners at the conference.

“This is a remarkable place, this is the most expensive acreage for farming in the world, the most productive. This is a very interesting place. There’s a lot of tremendous quiet wealth here tied up in land — and I’m happy to be a part of it,” O’Leary says.

The 11th Annual Land Investment Expo begins this morning and runs throughout the day.