You are here: Home / News / Senate president says it may be time to shut down Iowa Communications Network 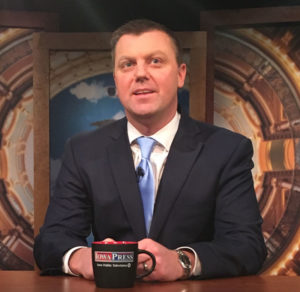 The president of the Iowa Senate says it may not be possible to sell the state-owned Iowa Communications Network — because no private-sector buyer wants it. Nearly 30 years ago, the legislature authorized construction of a state-owned fiber optics network to provide video and data connections for schools and state government.

Senator Jack Whitver, a Republican from Ankeny, says it may be time to pull the plug on the network.

“Right now, we’re mandating certain entities to buy coverage from the ICN at a rate that is higher than the market rate and so I don’t think that’s a good way to do business in the 21st century,” Whitver says. “I mean, frankly, the days of sitting in an ICN room like when I was a kid in Grinnell — those days are over. You pull up your phone now and you have FaceTime Live and so the world has changed and government needs to adapt to it.”

Whitver, who was elected to the Iowa Senate in 2011, has been an advocate of selling the network.

“One of my first years in the legislature, we voted to try to sell the ICN,” Whitver says. “That was unsuccessful, but there obviously need to be changes there.”

A recent audit found $380,000 of questionable spending at the Iowa Communications Network. It included the revelation that some state-purchased equipment had been delivered to the home of the network’s manager, who was fired early this month. Whitver says it may be time now for the state’s chief information officer to take over as manager of the network. As for selling the network itself, that’s tricky as there was an attempt four years ago to lease segments of the network to private-sector companies.

“We put it up for sale and we did not get a bid,” Whitver says.

Whitver says that could be a signal it’s time to just shut the network down. Whitver made his comments today during taping of Iowa Public Television’s “Iowa Press” program which airs tonight at 7:30.