You are here: Home / News / Star of ‘Shark Tank’ talks about show during Iowa visit 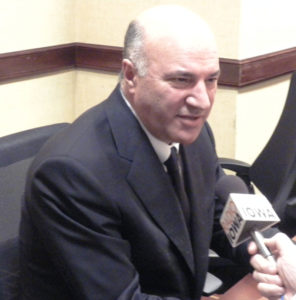 A star of the television show “Shark Tank” was in Iowa Friday to speak at an event.

Billionaire businessman Kevin O’Leary is a one of the “Sharks” who hear pitches from entrepreneurs and then decide if they will invest in that person’s business. The show is heading into its 10th year — and O’Leary tells Radio Iowa he is surprised by its longevity.

“I am and we all are. This was a show about business and business is boring — at least we thought — and that’s not the case,” O’Leary says. O’leary, who is also known as Mr. Wonderful on the show. He can be very blunt in telling an entrepreneur what he thinks of their chances to succeed.

“I get a lot of flack for telling the truth and I’m not going to stop. The truth is going to be the truth and the fact that your business has no merit is going to play itself out and you are going to lose all your money,” O’Leary “I just think the other sharks are disingenuous. They try and make themselves feel better by saying to somebody ‘I’m not going to write you a check, but keep doing what your are doing.’ I’d rather say, ‘look you are going to go to zero…and really entrepreneurship is about success and failure. And I have a very simple metric — if it’s not making money in 36 months — take it behind the barn and shoot it.” O’Leary says he’s had some big failures and some big successes in the investments he’s made on the show.

“Probably my biggest surprise is a company called Potato Parcel, which ships a picture of you on a potato to somebody. I’m making a fortune on that,” O’Leary says. He says you never know what’s going to work. O’Leary says he does get a lot of people who come up to him and ask to borrow money, and he says people need to know they can’t pitch him a plan and be on the show.

“There’s a law about this, you can’t predetermine the outcome of something like Shark Tank. They simply ask these entrepreneurs if you have ever petitioned or pitched a shark,” O’Leary explains. “And if you lie about it when I see you I’ll stand up and say I can’t talk to this person. Because I want the show to go on, I’m very proud of it, I’ve got 40 plus deals to protect, and I’m just thrilled to where we’ve gotten to.”