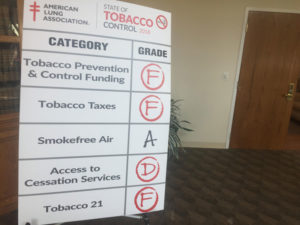 The American Lung Association is handing Iowa mostly failing grades for its efforts to curb smoking. In three of the five areas graded by the advocacy group, the state receives an F.

It earned one failing grade for the amount of funding that goes to tobacco prevention programs. A critical care doctor from Des Moines, Michael Witte, says people need support to kick the smoking habit.

“We do have to look at it as an addiction,” Witte said. “Gram for gram, tobacco or nicotine is ten times more addictive than heroin.” Iowa drew another F for the level of state tobacco taxes. Pat McKone, the senior regional director for the American Lung Association, would like to see the tax on a pack of cigarettes go up by at least a dollar fifty.

“This is, by far, the most effective strategy to reduce the harm from tobacco, period,” McKone said. “It is the most effective strategy.” Iowa received a third F for the minimum age for the purchase of tobacco products. The only area in which the state receives an A from the Lung Association is in providing smoke-free air in many public places. Just under 17% of Iowa adults smoke. More than 5,000 Iowans die each year from tobacco-related illnesses.