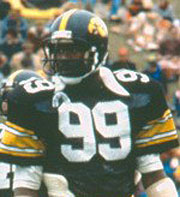 Former Iowa Hawkeye All-American Andre Tippett is in the Twin Cities where his New England Patriots play the Philadelphia Eagles on Sunday in Super Bowl 52.

Tippett was inducted into the Pro Football Hall of Fame in 2008 following a 12-year career and now serves as the Patriots’ executive director of community affairs.

“The thing that stands out the most has not changed”, said Tippett. “It is about playing 60 minutes of football and the team that commits the fewest amount of turnovers is going to win.”

Tippett was an All-American defensive end for the 1981 Iowa Hawkeyes that turned the program around under Hayden Fry. The Hawkeyes won a share of the Big Ten championship and played in the Rose Bowl for the first time since 1959.

“I love the University of Iowa”, added Tippett. “I am forever loyal as a Hawkeye fan. To come in when Hayden Fry first got there and then some of the coaches and players I have been around my long-lasting relationship with that university is amazing.”

Tippett was a second round draft pick of the Patriots in 1982. He played in the 1986 Super Bowl and finished his career with 100 sacks.