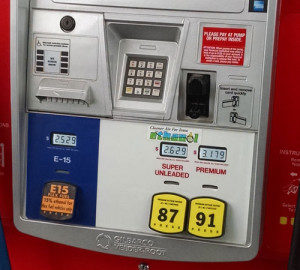 Gasoline prices have risen 20-cents a gallon in Iowa over the past month.

Gail Weinholzer , spokeswoman for AAA-Iowa, says when the nation’s financial markets see escalating figures, gas prices quickly follow. “We’ve seen an increase of all stocks and bonds, and crude oil is no different,” Weinholzer says. “We’ve seen stocks that apply to crude oil increase rather substantially. Crude oil is now selling for between $63 and $65 a barrel.”

That price would have to drop to $40 a barrel in order for gas prices to fall below $2.00 a gallon, Weinholzer says. This is normally the time of year when gas prices fall, so she’s expecting them to remain relatively steady, for now.

“I don’t know that we’ll see them continue to rise, but we certainly don’t anticipate any sort of fall anytime in the next couple of months,” Weinholzer says. “Once we get into March and April, we’re going to start the switchover from the winter to the summer grade fuel. That costs more to refine and those costs are passed on at the pump.”
Gas prices in Iowa are averaging $2.55 a gallon, up from $2.35 a month ago. The current national average is a penny higher than Iowa.

“We don’t expect prices to decline in the short term,” she says, “but certainly, three to four months out, we would expect prices to increase because of the switchover.” Iowa’s cheapest gas is in Council Bluffs at $2.40 a gallon while the highest prices are a three-way tie at $2.60 a gallon in Cedar Rapids, Des Moines and Dubuque.