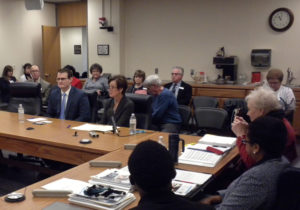 Lt. Governor Gregg and Governor Reynolds talk to the Board of Education.

Governor Kim Reynolds visited the State Board of Education at the end of last week to talk about various education topics.

Board member Mary Ellen Miller of Mason City talked about the dual enrollment program which saw almost 50,000 students earn college credit last year while still in high school. Miller told the governor there was one key figure that stood out to her.

“Eighty-percent of the students enrolled are Caucasian, 20% are minorities. That’s way beyond the demographic of the state,” Miller says. She says it’s a very successful program.

“What you see is a program that is really serving a minority group well — that’s a staggering number — one ouf of five,” Miller says. The program saw a 4.1% percent increase compared to the previous year. Governor Kim Reynolds says it is a positive for all students.

“It reduces the cost of higher education, so that’s a plus, we are always looking for ways to keep that down. Second of all, I think the statistics bear out that the students who dual enroll, they have a much higher rate of completion,” according to Reynolds.

Miller says there have even been some cases where a student has completed a two-year college degree while still in high school. Reynolds says those degrees are important. “We always say a four-year degree is not for everybody, there’s apprenticeships, certifications, two-year…but a lot of the kids who go through and get the two-year degree , down the road they are back at it,” according to Reynolds. “So it’s not like they completed (their education) they have that and that’s a motivator down the road if they want to advance their career they are not afraid to go back and finish it. So, it’s really important form that perspective too.”