You are here: Home / News / Two people sought in Sunday shooting at rest stop near Dows 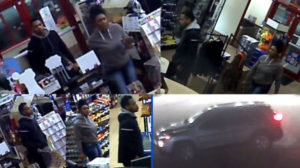 The Franklin County Sheriff is asking for help in identifying two people who may’ve been involved in a shooting at a rest stop.

The Sheriff’s Office got a report of a shooting at the rest stop at exit 159 along Interstate 35 near Dows Sunday at 1:38 a.m. The victim was taken to North Iowa Mercy Hospital for treatment. The victim’s name and condition were not released.

Investigators are looking for a black man and woman who were seen on video at a nearby convenience store prior to the shooting. They were driving a gray or silver four-door SUV, possibly a Jeep Cherokee.

Anyone with information on the identity of these two is asked to call the Franklin County Sheriff’s Office at 641-456-2731.