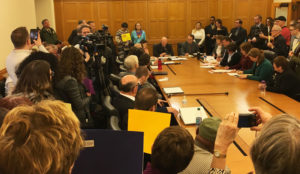 Lawmakers hold a hearing on the sanctuary city bill.

There was a packed hearing today at the statehouse for a bill that would withhold state funds from cities and counties that fail to cooperate with federal immigration agents and keep a person in jail for expected deportation.

A handful of police chiefs, including Marshalltown’s Michael Tupper, spoke in opposition.

“I think we’re trying to solve a problem that does not exist in Iowa,” Tupper said. “I’m not aware of any communities in Iowa that do not cooperate with the federal government or their law enforcement partners.”

Tupper told legislators the bill will create fear among immigrants and make it harder to prevent and investigate crimes. Storm Lake Police Chief Mark Prosser opposes the bill, too.

“Just the peripheral conversations, the rumors and so on spread a wave of fear in our communities that greatly impact our ability to create, maintain and grow relationships,” Prosser said. “In my community of 30 to 35 different ethnic groups in a community of about 12,000 to 13,000 people…those relationships are imperative that we are partners in crime prevention, that folks are not afraid to report crimes when they’ve been victimized.” 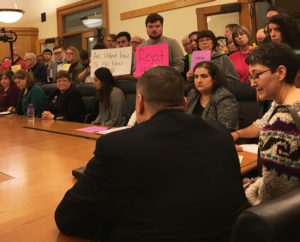 The subcommittee hearing for public comment on the bill lasted more than an hour. Karl Schilling, an officer with the Des Moines chapter of the League of United Latin American Citizens, suggested inaction on immigration reform at the federal level was the root cause of the dispute.

“What we really need is a rational immigration policy and we should all work for that instead of something that will intimidate people and keep them from coming to the police when they’re victimized,” Schilling said.

Alexa Rodriguez, the first person to speak, told legislators she was a high school student who opposed the bill.

“Relationships between local police and immigrants who are already terrified and terrorized are going to be broken,” she said, “and that people like me whether we know it’s right or wrong.”

“We just had it happen last week,” Matherly said. “A person was lodged in the jail because of us and the next day ICE picked them up. That notification system exists and they deal with that. It’s timely. It’s accurate and the system takes place, but we’re not the ones doing that, nor should we be.”

Representative Greg Heartsill, a Republican from Columbia, said that resolution in Iowa City and actions in other cities are what’s prompted this bill.

“You’re right, we have poor immigration policy, but at the same time we’re not going to make this situation any better by local municipalities continuing to thumb their nose at the federal government,” Heartsill said. “It’s not o.k. for when cities and counties tell their local law enforcement to look the other way or to stand down or to show contempt for the rule of law.”

The bill cleared the Iowa Senate last year and today is cleared a House subcommittee. Representative Steven Holt, a Republican from Denison, said he finds “no compelling reason” the bill shouldn’t become law.

“No Iowan should be harmed because someone is in this country illegally, could have been deported through cooperation with immigration authorities, but instead was released back into the community as has happened numerous times across our nation,” Holt said. “…I am saddened that certain communities appear to be putting ideology above the rule of law and political coorectness ahead of the safety of its citizens, but they are and that is why this legislation is necessary.”

City and county officials told legislators holding someone in jail indefinitely without a warrant could invite lawsuits. Holt — the bill’s manager in the House — is considering adjusting the legislation to ensure federal immigration officials provide a warrant when they expect to pick someone up in an Iowa jail for deportation.