You are here: Home / News / Making it legal for Iowans to bring out-of-state beer and wine into the state 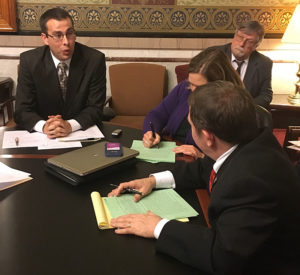 It’s currently illegal for Iowans to buy wine or beer in another country or even another state and bring it into Iowa.

Senator Roby Smith of Davenport is sponsoring a bill that, essentially, would let Iowans transport 48 cans of beer or six bottles of wine across the state line.

“This would bring common sense regulations to Iowa,” Smith says.

Smith’s proposal also would deal with wine collectors who live out of state and want to move to Iowa — with more than just six bottles of wine. Under current law, bringing just one bottle of wine into the state is against the law. Smith says he’s personally heard from people living in Illinois who say they can’t move to Iowa because of the current law.

“This is something that just makes it common sense to welcome servicemen and welcome anybody to Iowa on this and that’s what we’re getting at with this bill,” Smith says.

Smith’s bill would have a state official issue permits for out-of-staters to move themselves and their wine collections into an Iowa home. Senator Jim Carlin of Sioux City was part of a three-member subcommittee that reviewed the bill Monday afternoon and he signed off on all the changes.