You are here: Home / Fires/Accidents/Disasters / Two people die in accident in Cedar Rapids 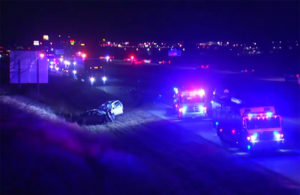 Two people died in this accident on I-380 in Cedar Rapids. (KCRG TV photo)

A police department spokesman says they received multiple calls just after nine p.m. about a car traveling south in the northbound lanes of the interstate near 33rd Avenue Southwest. Responding officers found an accident at 76th Avenue.

Investigators say 69-year-old Robert Norton Junior of Iowa City was going the wrong way in a 2007 Toyota Prius and he ran into a 2008 Volvo driven by 28-year-old Jenifer Rae Keonighain of Cedar Rapids. Both drivers died in the accident.

Two people in a third vehicle involved in the accident had non-life threatening injuries and were taken to the hospital. No other details on the accident are yet available.