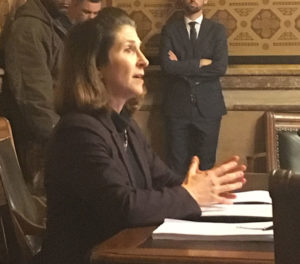 Lawmakers on a House panel are expressing surprise at the audacity of a state official accused of hiring cronies who were unqualified for their state jobs at the state-owned fiber optics network.

A recent state audit chronicled at least $380,000 in misspending in the Iowa Communications Network when Ric Lumbard was the network’s manager.

“I think you see an absolute, concerted effort by an individual to circumvent the law…This is a complete shyster,” said Representative Bobby Kaufman of Wilton, chairman of the House Government Oversight Committee.

The panel met with the state auditor for 90 minutes today to review how the Iowa Communications Network’s manager was, for example, able to hide how taxpayers had been billed for a vacation to Belize. Auditors also discovered he lied about his secretary’s job prospects elsewhere so he could give her a double-digit raise. Kaufmann said he’s willing to consider requiring “more stringent background checks” for top managers and the people they have the authority to hire.

“The role of this committee is not just oversight, it’s also to make legislative recommendations,” he said, “and stronger hiring practices is certainly something that we’re willing to entertain.”

Representative Vicki Lensing of Iowa City said it seems as if there were no “checks and balances” in state government to catch the deception in the Iowa Communications Network.

“How do we know this isn’t happening in other agencies?” Lensing asked during today’s meeting.

Representative Dawn Pettengill, a Republican from Mount Auburn, paused while asking questions of the state auditor to state her opinion of the situation.

This past July, employees in the Iowa Communications Network first contacted the governor’s office with concerns and an audit was immediately ordered. Kaufmann is promising to shield other “whistleblowers” in state government who step forward.

“I think that the fact that we are raising this egregious act into such a high profile should scare the living daylights out of anybody else that may be acting nefariously and anyone and everyone that can think of anything possibly that can be going wrong, please contact us. You will be protected,” Kaufmann said. “The role of government is not to be misspending money like this.”

The House Government Oversight Committee will meet again next week and lawmakers hope to question people who’ve worked at the Iowa Communications Network or who are paid to serve on the board that oversees the network.