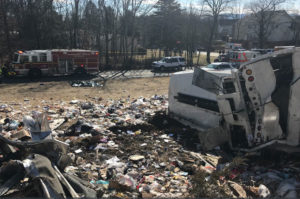 A train carrying Republican lawmakers to a GOP retreat in West Virginia ran into a dump truck today.

A spokesperson for Iowa Congressman David Young says Young was on the train, and was not injured in the accident.

Iowa Senator Joni Ernst tweeted that she was on the train and is okay. The first reports indicate that several members of Congress sustained minor injuries and one of the people in the garbage truck was killed.

Update: Iowa Congressman Steve King was also on the train and is okay.