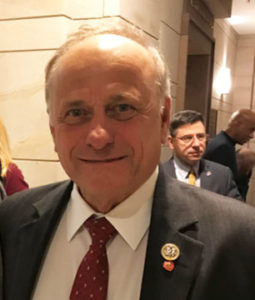 President Trump outlined what he called “vital reform” of the nation’s immigration laws during his “State of the Union” speech last night, but Republican Congressman Steve King is skeptical.

“The president said he wants to solve this immigration issue once and for all,” King said, “but I think even his proposal falls far short.”

King said he doubts there’s enough GOP support in the House for a key component of Trump’s plan. King is opposed to citizenship for the one-point-eight million people who’d qualify for the DACA program because they were brought into the country illegally when they were children.

“Amnesty is something that just sacrifices the rule of law and he said also a path to citizenship over 12 years for them,” King said during an interview with Radio Iowa after the president’s speech. “I was watching the crowd, as I do, and it’s most instructive. The Republicans didn’t seem very enthusiastic about a path to citizenship.”

And King said it didn’t appear to him Democrats were that enthusiastic about Trump’s offer either. King predicted the “trade” Trump is offering for DACA recipients won’t secure enough Democratic votes for the entire package to make up for lost GOP votes.

“I think that he’s not thought this through,” King said, “or he’s got a different equation and it works different than mine does.”

King wants a wall along the southern border and tougher enforcement of current immigration laws, plus King would vote to end so-called “chain migration,” something that is part of the president’s plan. Other members of Iowa’s congressional delegation are signalling they’re open to an immigration bill that would offer some sort of legal status to the so-called “Dreamers” who arrived illegally in the U.S. when they were children. Senator Joni Ernst, a Republican from Red Oak, said Trump’s proposals on immigration are a “starting point.”

“He has given congress direction, but that is not the final word,” Ernst told Radio Iowa last night.

Congressman Rod Blum, a Republican from Dubuque, would like to vote for a bill that includes a fix for DACA recipients along with changes in the legal immigration system and a requirement that businesses use an electronic verification system to ensure all employees are legal residents or citizens of the U.S.

“If wishes were fishes and I could have things my way,” Blum said, with a laugh, “we would just do the entire immigration system reform. As long as we’re doing this, let’s do the whole thing. I’m not sure that we will get to that point.”

Dave Loebsack of Iowa City, the only Democrat in Iowa’s congressional delegation, expressed optimism the two parties can find a way to strike a deal on immigration.

“I’m just hoping that in the next week, two weeks, three weeks perhaps, we’re going to get to where we probably were in ’13. You know the Senate did pass a bipartisan immigration reform proposal (in 2013),” Loebsack told Radio Iowa. “…There are several bipartisan bills out there right now.”

Congressman David Young, a Republican from Van Meter, said finding something that can pass muster in both the Senate and House won’t be easy.

“But I think it is a priority by both sides of the aisle to make sure that there’s not just a deal in the end for the deal’s sake, but there’s actually a real solution to this issue,” Young said.

And Young predicted any successful deal will have to include all the components or “pillars” to immigration reform that Trump outlined in his speech last night.