You are here: Home / Sports / Croston’s journey takes him to Super Bowl 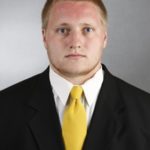 Cole Croston’s pro career began much like his college career and the former Iowa standout will take part in Sunday’s Super Bowl in Minneapolis as a reserve offensive lineman for the New England Patriots. Croston walked on at Iowa after high school and eventually became a two-year starter for the Hawkeyes. He went undrafted last spring before signing as a free agent with the Patriots.

“Sure there are some similarities where you kind of have a chip on your shoulder and you want to earn a spot”, said Croston. Other than that you are just working to try and earn a spot.”

Croston feels his ability to play multiple positions helped him earn a spot on the 53-man roster.

“They have a saying here the more you can do”, added Croston. “I think I was able to show I could play multiple positions and take things from the classroom to the field and they appreciated that.”

He was inactive the first nine games of the season before making his NFL debut in Week 11, coming in at left guard to finish the game in a 33-8 win over the Raiders.