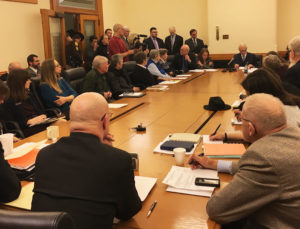 Legislators hold a hearing on the death penalty bill.

A bill that would reinstate the death penalty in Iowa has cleared initial review in the Iowa House, but it’s future is in doubt after the legislator assigned to guide the bill through debate says he’s a “no” if it comes up for a vote in committee.

Representative Steven Holt, a Republican from Denison, said “conceptually and morally,” he believes the death penalty is appropriate for certain horrific crimes.

“Yet practically, I arrived at a different conclusion than I expected,” Holt said. “I have always believed that life in prison costs taxpayers so much money, yet I found out in researching this legislation it costs more to have someone on death row.”

Holt said he’s also struck by how many individuals have been wrongfully convicted and sentenced to death row.

“As a result of DNA evidence, we’re seeing that more and more today,” Holt said. “And it really strikes me deep, the thought of executing someone who is innocent.”

Holt said administering the death penalty fairly was something he struggled with the most.

“Statistics show, without a doubt, that those of lesser means are more likely to receive the death penalty than are those with greater assets and ability to hire the best attorneys, so my conclusion after researching this bill was not exactly what I expected,” Holt said. “I support the death penalty in theory and believe it is absolutely morally o.k. based upon my faith, but I have great issues with its practical and fair application.”

Holt’s announcement came at the conclusion of a statehouse hearing on a bill that would allow capital punishment. The first to testify was John Wolfe of Clinton, the father of State Representative Mary Wolfe. Two of his daughters who lived in Pittsburg were murdered four years ago and the man found guilty of the crime was sentenced to life in prison.

“The good thing about that is it ended it. It did not go on,” Wolfe said. “…It probably takes 25 years for someone who is executed to go through everything involved in the process. This is over as far as we’re concerned.”

Many who testified were pastors. Dave Martin of the Faith Assembly of God Church in Marshalltown expressed support for the death penalty in rare circumstance.

“We have mixed feelings in this in our denomination. We believe, though, that the scripture shows us capital punishment under premeditated murder would happen in the Old Testament, carried over into the New Testament as well,” Martin said. “…We need to pray for extreme wisdom as you go about doing your business…that God would help us find the right answer.”

Reverend David Sickelka, senior pastor at the United Church of Christ in Urbandale, spoke against the bill on behalf of the Interfaith Alliance of Iowa.

“If the death penalty does not deter crime, is not applied equitably, saps our justice system of resources and cannot be reversed when there are errors, then it is not just. It is simply vengeance,” Sickelka said. “I implore you to stop this legislation.”

The Interfaith Alliance submitted a letter signed by 176 Iowa clergy who oppose the death.