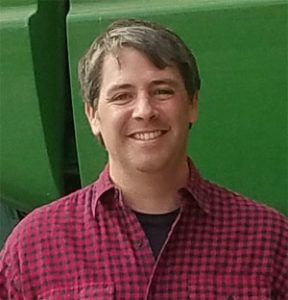 An Iowan who was an administrator of the U.S.D.A.’s Risk Management Agency is running for the Iowa Democratic Party’s nomination for state ag secretary. Tim Gannon, a Mingo native, says the state’s agricultural sector and rural Iowa face some big challenges.

“Growing up in a small town and farming with my dad on our family’s century farm…and the experience I have having worked eight years at the U.S. Department of Agriculture lend me the needed tools to take on this job,” Gannon says.

Gannon, who lives in Des Moines, is a crop insurance agent and is farming with his dad and cousin on the family’s 950 acre farm near Mingo.

“I think I’ve been an ambassador for our state and especially its farmers and folks who live in the rural parts for as long as I’ve been alive,” Gannon says. “…We’ve got to not only continue to lead the world and lead the country in growing corn and beans and raising pigs and eggs, but we’ve also got to figure out new ways to add value to those products.”

Gannon says agriculture is the “foundation” of the state’s economy and job-creation prospects and that’s why it’s important to keep processing ag commodities here, “especially in small towns.” Protecting the state’s soil and water will keep “Iowa’s best and brightest” living in rural Iowa, according to Gannon. And Gannon says he hopes to be a bridge uniting those who practice “traditional” agriculture and those embracing organic practices.

“The first thing we have to realize is there are a whole lot fewer people living and working and making their living in rural Iowa than there are in other places,” Gannon says, “and so if we’re not united in rural Iowa, it makes it harder to make progress on things that we all agree about.”

A few Republicans have announced they are runing for secretary of agriculture. Current Ag Secretary Bill Northey was nominated for a top job in the U.S.D.A, months ago, but hasn’t been able to take the post because Texas Senator Ted Cruz is blocking a senate confirmation vote on Northey’s nomination.