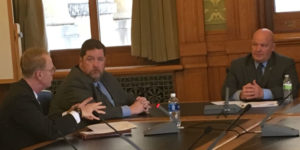 A proposed amendment to insert legal rights for crime victims in Iowa’s constitution was the subject of two hearings at the capitol Wednesday.

Paul Cassell, a law professor at the University of Utah, told Iowa lawmakers 34 other states refer to the rights of crime victims in their constitutions.

“This would make a real world difference for those people,” Cassell said. “The experience in other states has been very positive and I hope Iowa will move forward make this a part of its constitution as well.”

Two organizations that advocate for crime victims registered their opposition. Kerri True-Funk of the Iowa Coalition Against Sexual Assault said the amendment is “largely symbolic” and will do little to protect victims.

“When we’re talking about crime victims being heard in a situation, being valued as a person, we have to change our culture, not our constitution,” True-Funk said.

Lawmakers are still reviewing the proposed amendment and considering alterations before deciding whether it may advance to a committee.The proposal would put in the state constitution a requirement that victims be notified at multiple steps in the legal process and victims would be given the right to refuse to give a “deposition” — the legal term for a meeting before a trial when the defendant’s lawyer asks the victim questions.

The proposed amendment would have to be okayed by legislators this year and again in either 2019 or 2020. Only then would it be placed on the ballot so Iowa voters could decide if the language is added to the state constitution.