You are here: Home / Crime / Courts / Man charged in connection with vandalism at the Field of Dreams site 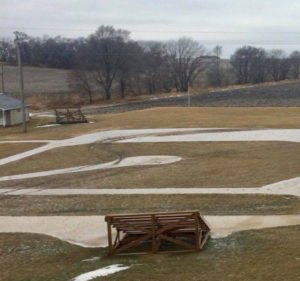 Ruts were left in the field of dreams during the vandalism.

A Dyersville man has been arrested for vandalizing the Field of Dreams movie site last week.

Twenty-year-old Austin Pape turned himself into Dubuque County authorities Thursday morning. Dyersville Police have charged Pape with second degree criminal mischief, a class D felony, as well as reckless driving. Maintenance workers discovered the vandalism at the Field of Dreams on the morning of January 23.

A vehicle had driven through the infield and outfield, leaving deep tire ruts and damaging the turf. The sprinkler system was also damaged. A Go Fund Me account was set up, with hopes of raising $15,000 to repair the damage and install a security system.

Over $19,000 has already been raised in just over one week, with nearly 600 people contributing.