You are here: Home / News / Monday call the last straw for senator taking aim at ‘spoofing’ 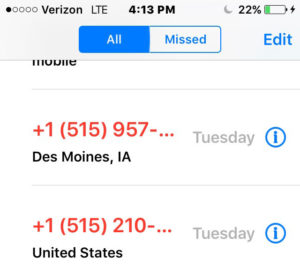 Annoyed by calls on your cell phone from a familiar-looking number, but it winds up being a telemarketer? State Senator Ken Rozenboom is, too.

“Because I’m in the senate and I’d like to respond to constituents, I tend to answer the phone but increasingly, of course, they’re telemarketing calls,” Rozenboom said during an interview. “This Monday was the last straw for me.”

Rozenboom got a call with a 641 area code and a 295 prefix — indicating it was a call from someone in his hometown of Oskaloosa.

“I answered it, listened the sales spiel on credit cards, disconnected, called the number back immediately,” Rozenboom said. “This nice lady says: ‘Good morning.’ And I’m kind of caught off guard ’cause I didn’t expect an answer and I said: ‘I’m sorry, ma’am. I’m Ken Rozenboom and I just got a telemarketing call from this number.’

“And she said: ‘Oh, I get those all the time. I’m so sick of it!” And then I said: ‘Well, the rest of the story is I’m Senator Ken Rozenboom. I’m actually going to drop a bill in the Iowa Senate today to try to get away from this fraudulent use of people’s phone numbers.”

It’s against the federal “Truth in Caller ID Act” to make such misrepresentations, but the practice is widespread and is now known as spoofing. Rozenboom is sponsoring legislation that makes it a crime to use “false or misleading” numbers when making calls to Iowans. Rozenboom said officials in the Iowa attorney general’s office have told him it could be another legal tool for going after telemarketers preying on — and annoying — Iowans.

“Whether it’ll actually make a difference or not I think is a matter of technology,” Rozenboom said. “I sure hope it does.”

If the bill becomes law, the fine would be $40,000 call. The bill cleared an Iowa Senate subcommittee Thursday.

Rozenberg says as he walked out of that subcommittee meeting, his phone cell phone rang, with another one of those calls.