You are here: Home / Crime / Courts / University of Iowa to pull Stephen Wynn’s name from Institute for Vision Research 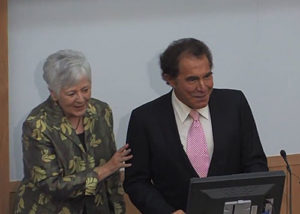 Stephen Wynn and former University of Iowa President Sally Mason at the ceremony naming the Vision Institute after Wynn.

The University of Iowa is removing the name of a prominent donor from its Institute for Vision Research.

The U-I released a statement saying it would remove Stephen Wynn’s name from the institute after leadership determined keeping his name would be damaging to the institution’s reputation following the recent allegations of sexual misconduct by Wynn.

Wynn is a billionaire casino magnate who donated $25 million to the institute in 2013 to help with the research of eye disease. Wynn suffers from a degenerative eye disease that cost him his vision.

The announcement includes a statement from U-I president Bruce Harreld: “The University of Iowa is committed to ending sexual violence and sexual misconduct and ensuring survivors know they are believed, supported, and assisted. It is incongruous with the university’s values to maintain the Wynn name on our program and building.”

Wynn has already donated 20 of the $25 million — but a U-I spokesperson could not say if he will donate the rest of the money now that his name has been pulled from the Vision Institute.

Wynn appeared at the University of Iowa in October of 2013. In a video of that appearance, he spoke about having the institute named for him. “Having your name on the sign is a cool thing,” Wynn said as the audience laughed.

Wynn also talked about the work on degenerative eye disease at the Vision Insitute and what it meant to him to be a part of it.”It’s a happy day for me and I am greatful to be part of this family. And I assure you that as long as I am alive and after I am gone I will still be part of this family. So, thank you everybody,” Wynn said.

The Board of Regents must approved the request to remove Wynn’s name from the institute.