You are here: Home / News / Indianola native has a sideline view of the Super Bowl as intern for Patriots 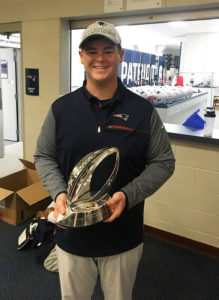 An Iowan will have a front row seat at Sunday’s Super Bowl. Jordan Pierce is an athletic training intern with the New England Patriots sports medicine staff.

The 25-year-old Indianola-native and Iowa State University graduate has been with the team in Minneapolis since Monday. “Thinking back on the last couple of days and reflect on the magnitude of the event, it’s kind of hard to comprehend because it’s so huge. You know, everyone pays attention to it. Growing up, we always watched the Super Bowl and had Super Bowl parties. Now, to actually be there and a part of it – it’s incredible,” Pierce said.

The Patriots face the Philadelphia Eagles in Super Bowl LII. Pierce will be in the stadium, staying busy in the locker room and on the sidelines. “Doing field setup, locker room and athletic training room setup leading up to the game. During the game, I’m generally on the bench doing bench hydration, first aid care and just helping the guys with anything they need,” Pierce said.

Pierce has been with the Patriots all season. He’s now going to be involved in one of the world’s biggest sporting events, but knows from experience he won’t be able to watch much of the game.

“There are times when we are just so swamped that I couldn’t tell you half of the plays that are going on, just because we’re taking care of guys on the bench or running around,” Pierce said. “But, I anticipate hopefully being able to see a few plays this weekend and being able to enjoy the moment a little bit.”

As a kid, growing up in Indianola, Pierce rooted for the Green Bay Packers. Now, he’s a full-blown Patriots fan – as are his parents, who – thanks to their son – have tickets to the Super Bowl. “I was able to get those, so they’ll be able to go to the game and watch the halftime show, which I’m sure will be great, and hopefully see a Patriots victory,” Pierce said.

During his time in Ames, Pierce worked with the Cyclone football team. He also spent two summers interning with the NFL’s Denver Broncos. Pierce’s interest in athletic training as a profession was sparked by his own sports-related injury he suffered in high school. Now, Pierce is working for a team playing in the Super Bowl.