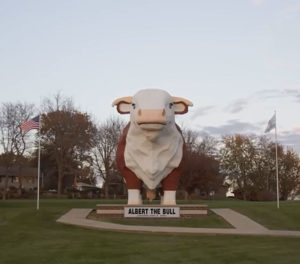 One of the ads in the big game Sunday will feature a really big western Iowa bull. A 15-second Cenex commercial features “Albert the Bull”, some actors, and some real Audubon residents.

Audubon Chamber of Commerce president Brandon Toft says the Albert spot is expected to air sometime around the third quarter. He says two representatives of Minnesota-based CHS Energy’s advertising branch appeared at the banquet to show the commercial and also a short documentary on Albert.

“We are going to get more than our 15 seconds of fame. They put together this really nice, it’s about 5 minutes, short documentary on Albert the Bull featuring some members of our community who were either around then, or helped put him together. Kind of some people who everybody knows,” Toft says.

He was impressed with the documentary. “It’s just really nicely done,” Toft says,”you know you see documentaries on other things and you think that doesn’t look like it looks here, when it’s kind of made for TV. It was really professionally done. It was just really neat to see.”

The City was contacted late last Summer about shooting the commercial on location. Albert, who is 53-years old and 28-feet tall, was showing his age, so the town reacted quickly to give him some much needed repairs. He says they got a grant and got it repainted and made a new sign for Albert.

The filming took place in mid-November. Toft said the residents of Audubon County are excited to see the Cenex ad, which will make a play on the words “Super Bowl” and turn it into “Super Bull.” And, while the short version of the commercial that debuts on TV for viewers throughout the Midwest Region features mostly actors, at the end, there is a scene featuring members of the community standing in front of Albert. Toft was not present for that particular shot…he was busy with basketball that morning.