You are here: Home / News / Exhibit of pro football artifacts opens in Davenport 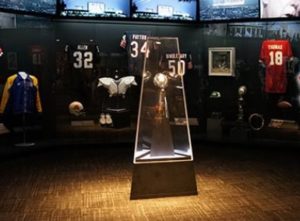 What’s billed as the most comprehensive traveling exhibit ever done on America’s most popular sport opens this weekend in Davenport, coinciding with Super Bowl Sunday.

The exhibit “Gridiron Glory” features more than 200 artifacts on loan from the Pro Football Hall of Fame in Ohio. Kim Findlay, president and CEO of the Putnam Museum & Science Center, says the items date back to the early 1900s.

Findlay says, “It’s really about the grand days of the growth of football as our national sport and this fervor that we have about our allegiance to teams and the outstanding athletes who have made this game their career.”

The collection includes a host of items from decades of football history, as well as rare photos and one-of-a-kind documents.

“You’ll see everything from a Vince Lombardi trophy to items that Knute Rockne owned,” she says, “up through the ’40s, the ’50s and into footballs and jerseys that were worn or played with in record-breaking seasons.”

The 6,000 square-foot exhibit includes a 180-degree theater that’ll be showing some of the sport’s most amazing moments over the decades. Findlay calls it an immersive fan experience.

“There’s an officials’ hood they put over themselves to look at a screen for a replay of a play,” Findlay says. “You’ll get to do that just as an official would on the sidelines. When we watch on TV, we see it from the outside. We don’t get to see what they’re looking at, but you will in this exhibit.”

Another section of the exhibit is called Training Camp, where visitors of all ages can see how their physical abilities might stack up against the pros.

Findlay says, “The families who come will really enjoy this because it’s great for the younger people, not that we adults shouldn’t give it a try, but it compares your vertical leap to what a pro’s vertical leap is likely to be, or your ability to broad jump, or your passing accuracy, your kicking ability.”

One of the nation’s first professional football teams was based in the Quad Cities, the Rock Island Independents, from 1907 to 1926. The exhibit opens to the public Saturday.