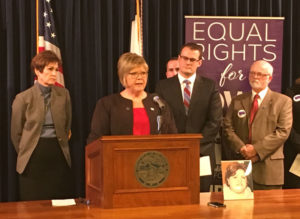 Linda Chapman displayed a photo of her daughter Nikki during the Governor’s news conference.

Governor Kim Reynolds is calling on legislators to set Iowa on a path to letting voters decide if a victims’ rights amendment should be added to the state constitution.

“Currently, Iowa’s judicial system works pretty well for victims…but that doesn’t mean that we can’t do more,” Reynolds said this morning during her weekly news conference. “…Victims and their families deserve the same constitutional protections given to the accused.”

Linda Chapman’s daughter, 25-year-old Nikki of Dubuque, was killed by a drunk driver near Peosta nearly 14 years ago.

“Losing a child has to be the absolute worst nightmare a parent can suffer,” said Chapman, who was invited to speak at the governor’s news conference. “Part of myself is buried with my Nikki. The grieving process for a parent losing a child is most difficult, but when you add the fact that this was a totally preventable crime, emotions compound the nightmare.” A

Chapman told reporters being “thrown into” a court system she and her family didn’t understand made the situation worse. Chapman has since become a victim advocate.

“A common statement from the victims: ‘It seems like the offender has all the rights and we have none,'” Chapman said. “I have to agree, sadly. It doesn’t seem fair that victims do not has constitutional rights as those who break the law.”

Story County Attorney Jessica Reynolds said as a prosecutor, she favors Iowa joining 34 other states which have added a victims’ rights amendment to their state constitution.

Legislators who back the amendment say they’re working on adjusting the proposed language, to address concerns raised during public hearings last week. Groups representing Iowa victims opposed the measure, saying it would divert resources to the criminal justice system that could be used to support victims.

If the proposed victims’ rights amendment is endorsed by the Iowa House and Senate THIS year and then again sometime in the following two years, it could be submitted for voter approval in the 2020 election.