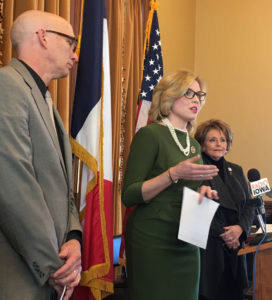 Iowa’s public schools are lobbying for an extension of the statewide one percent sales tax that helps pay for new buildings and other school-related infrastructure. The tax is scheduled to end in 2029.

Republicans in the legislature say they’re willing to continue the tax for 20 years beyond that, but may require a portion to be used for direct property tax relief.

“Giving them the resources that they need to build safe classrooms for our students, modern classrooms for out students,” Representative Ashley Hinson, a Republican from Marion, said during a statehouse news conference late last week. “…We are looking at the extension of that one-cent sales tax that has had support across the state of Iowa for years.”

School officials say they’ve used nearly all the tax that will be collected now through the end of 2029 as leverage to pay off bonds borrowed to finance infrastructure projects. Hinson indicated she and her Republican colleagues haven’t settled on “specific language” yet, but may prevent sales tax money from being spent on certain projects.

“The priority is on schools and, you know, if a school needs a boiler and they build an athletic facility, people might think those priorities are a little bit backwards so I think what we’re trying to do is make sure that the dollars go to what they should go to first, as a priority, and so we’ve talked about the whole gamut of options,” Hinson said. “We’re looking at some triggers in place to give some more local control to people, so they might be able to hold their school boards more accountable.”

An analysis from the Legislative Services Agency indicates the 20-year extension of the statewide one-cent sales tax could generate as much as $16 billion for school infrastructure over those two decades.