You are here: Home / Fires/Accidents/Disasters / Multiple accidents and at least 5 deaths reported in winter storm 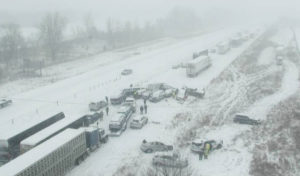 DOT camera view of I-35 accident near Ames.

There have been several accidents caused by today’s winter storm.

DOT Winter Operations Administrator Craig Bargfrede says speed played a factor in a couple of ways as they tried to keep roadways clear.

“The amount of snow and how much we were getting — couple that with the speed and visibility — that’s what ended up (causing) a lot of the situations with crashes across the state today in numerous places,” Bargfrede says. He says many drivers hadn’t been in these conditions yet this winter.

“This is probably one of the biggest events that we’ve seen statewide in the last couple of years. So, it’s just one of those reminders to get back to those winter driving skills. Slow your speed down and increase your distance between the vehicles in front of you and around you,” according to Bargfrede. Bargfrede says he doesn’t know of any areas where the plows had to be pulled from the highways, but the number of accidents caused some issues.

He says there were a number of instances where state plows were caught in the lines of traffic and couldn’t do anything until the vehicles were moved off the road and traffic was moving. Bargfrede says many of the state roadways are 100 percent covered in snow and ice and the snow is still falling. He says they will continue working on the roadways through the night.

“I know the garages have made plans for shifting personnel,” Bargfrede says. “We’ll continue being out there until we get the roads back to seasonal conditions again.” He says they will attack the roads with their plows — but in cases where the temperature drops below 15 degrees — salt becomes less effective in trying to clear away ice and snow.

“But we still try to put some material out there in those instances where we can gain friction back. So, we may see some area, especially at intersections and ramps where we may put down a 50-50 mix — which is a 50-50 blend of sand and salt — to get some friction back on the road,” Bargfrede explains. Bargfrede advises you to check the DOT’s 511 site to check the travel conditions before you head out anywhere in the state.

The Cedar Rapids Police Department reports two people died in an accident on Interstate 380 in the northbound lane just past the Highway 30 exit at 11:22 this morning. Officers arrived on scene and found a single vehicle accident involving a 2007 Mercury Montego that had apparently left the roadway and struck a pillar support of a bridge overpass. There were 3 adult men in the vehicle. Two of the men were dead at the scene, and a third was transported to a local hospital with serious injuries.

An accident on I-35 near Ames backed up traffic for several hours today as they worked to clear the cars. One person died in that accident.  Two people died in an accident in Winneshiek County.

The names of the victims in the accidents are not yet available.