You are here: Home / News / Snow expected to end by this evening 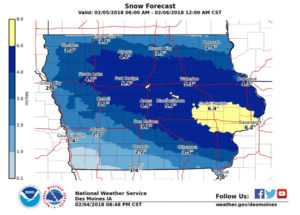 Heavy snow that started falling early this morning in northwest Iowa will be ending in eastern Iowa late tonight.

National Weather Service Meteorologist Kurt Kotenberg says some areas of the state are getting the heaviest snowfall totals they’ve seen in several years. “By the time everything is said and done, by around seven o’clock or so, the Des Moines metro looks to be around the 4-to-6-inch range for total snowfall,” Kotenberg said. “The highest amounts will likely range from Fort Dodge to Webster City to Marshalltown, and they’ll be closer to the 6-to-8 inch total mark.”

Some very cold air is entering the state with the snow. Overnight low temperatures will range from 10-below zero northwest to the single digits (above zero) across southern Iowa. High temperatures on Tuesday are expected mainly in the teens.