You are here: Home / Education / Brokaw collection now available for public viewing at the University of Iowa 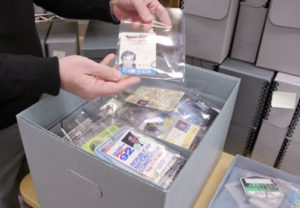 A box of media passes from the collection.

The University of Iowa is making the materials donated to the school from retired journalist Tom Brokaw available to the public.

Brokaw attended the school his first year of college and donated more than 90 boxes of materials to the school in November of 2016. Library and Information Sciences graduate student Elizabeth Riordan took on the project of sorting through everything. She says it isn’t the largest collection they have, but took some time to go through.

“When you first get a collection your first job is to do a general sort kind of and break it off in series — photographs, events, awards — and a lot of those kind of intertwined, so it was kind of hard to make definitive lines in a collection like that,” Riordan says. She says it was sometimes easy to figure out what each item was and there were some times when it took some research.

She says she would be going through the collection and didn’t have any idea what it was, but she would find a post it note from Brokaw with a scribbled description of what the item was. Riordan says Brokaw’s assistant was helpful in figuring out what things were. She says there are a variety of different items that give you an idea of what Brokaw was working on. 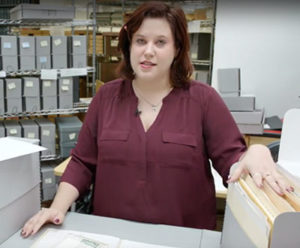 “We’ve got everything from his appointment books from the early years, it kind of stops in the beginning of 2000,”Riordan says. “That’s interesting because it kind of maps out this mundane life, but then all of a sudden you have ‘haircut appointment,’ then the next day ‘meet with President Reagan,’ which is interesting to look at.”

There are a lot of letters from various figures in entertainment and politics. “He made a lot of friendships and bonds with different individuals throughout his career — and so we have a lot of those letters — everywhere from Tom Hanks and Steven Spielberg, because of their work with Saving Private Ryan, to politicians like Dick Chenney and George Bush and Obama,” according to Riordan. “You get such a wide range of people he’s been in communication with.” The collections is called “The Papers of Tom Brokaw: A Life & Career.”

Riordan says there is a finding aide for the collection. She says it is like a road map to the collection, and anything available to the public can be found there. Riordan is from Des Moines and was working on her masters degree at the U-I when the chance came up to work on the collection.