You are here: Home / Human Interest / More people are thinking about going from big to tiny when it comes to homes 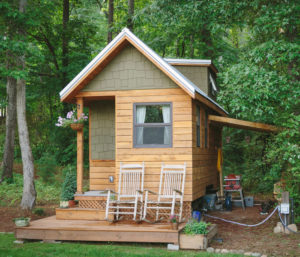 There’s a big movement in tiny homes and some Iowans are adopting the scaled-back, minimalist lifestyle.

“There’s challenges living in any space, whether it’s large or small,” Weaver says. “I feel like as humans, we’re obviously very adaptable and most people don’t realize how small of a space they can comfortably live in until they actually try it out.”

Weaver says he’s always loved simplicity and was initially drawn to tiny homes as an alternative starter home option, but has since become obsessed with the endless possibility they offer. “Financial breathing room,” is how he describes it.

“The cost of housing is most people’s largest line item in their monthly budget but for us, that’s not the case,” Weaver says. “We spend quite a bit less than most people spend per month on our housing expense. That opens up all sorts of opportunity to pay loans off, to travel more, if that’s what you want to do.” Not everyone could live with their partner in a space that’s eight-and-a-half by 32-feet. 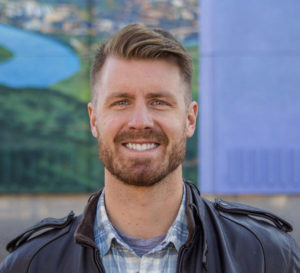 People in the under-30 demographic are the top buyers of tiny homes, Weaver says, followed closely be people 60 and up who want to downsize. He’s also convinced the tiny home lifestyle has been a boon to his marriage.

“Depending on who you are, you actually end up communicating sometimes more with the person you’re living in the small space with,” Weaver says, laughing. “There’s not really a place to run away from whatever it is you might be fighting about. You either have to talk about it or leave the house.”

Weaver’s company is partnering with the Iowa Lottery for a scratch-off game called, “Tiny Home, Big Wins!” A $60,000 custom-designed tiny home from Wind River is the grand prize. While Weaver and his wife have lived in their tiny home for three years, an addition to the family has made them rethink their options.

“We have a 14-month-old son now and since he’s started getting close to walking, for the first time, the home is actually feeling a little small for the phase of life that we’re entering,” Weaver says. “Because of the money that we were able to save living tiny, we were able to purchase a piece of property and we’re building a small home of 950 square feet.” Once the cottage is built, Weaver plans to use his current tiny home as a rental property.

Weaver will be giving multiple presentations at the Des Moines Home and Garden Show, running Thursday through Sunday at the Iowa Events Center.