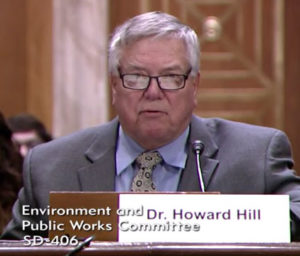 An Iowa native who is president of the National Pork Producers Council testified before a U.S. Senate committee Wednesday on the impact of federal environmental policy and regulations on farmers.

Howard Hill is a veterinarian and a hog farmer from Cambridge. He told the committee that pork producers have a long history of working with federal regulators and support federal policies and programs as long as they are grounded in three principles. “The environmental performance expectations for producers have a high probability of resulting in meaningful environmental improvements. Two, the measures involved are practical and affordable, and three — producers are given a realistic time to adopt the measures and associated systems to their operations so that they can continue to be profitable and successful,” Hill says.

Doctor Hill says the NPPC has worked with the EPA on numerous occasions to ensure those principles are met. He says a good example of that is the national air emissions study. Hill says the pork producers used around six million dollars of their own funds to support the EPA supervised third-party study, and some 5,000 producers enrolled in air consent agreements that made the work possible.

Hill told the Senators they will also fight bad policies and programs if necessary. “Pork producers do not oppose environmental regulations — but they’ll oppose rules that are not sound, effective and practical,” Hill says. Hill made his comments to the Senate Committee on Environment and Public Works. He was introduced by Iowa Senator Joni Ernst, who is a member of the committee.