You are here: Home / Agriculture / Iowa Senators push for end to hold on Northey nomination (video) 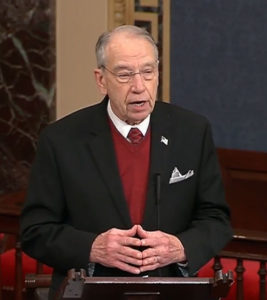 Iowa’s two U.S. Senators are calling for action on the nomination of Iowa’s Ag Secretary to join the U.S. Department of Agriculture. Republicans Joni Ernst and Chuck Grassley both spoke on the Senate floor Wednesday.

“Bill Northey should be confirmed by this body,” Grassley said. “He has overwhelming bipartisan support.” The Senate Agriculture Committee approved Northey’s nomination to be the U.S.D.A. Undersecretary for Farm Production and Conservation back in October.

Texas Senator Ted Cruz has been blocking a vote in the full Senate on Northey’s nomination over his concerns about job losses at oil refineries that Cruz says are caused by the federal production mandate for ethanol. According to Grassley, Cruz is “taking a nominee hostage to try and force an ill-conceived policy change.” Grassley has met with Cruz, who’s refusing to budge on the matter.

“I don’t know what the next step is, but I think that Bill Northey is such a good person for this position, I’m going to continue to work as long as he wants me to work for his nomination to proceed,” Grassley said. Ernst, in her remarks on the Senate floor, called Northey a great friend and a great Iowan.

“And most importantly, he is a tenacious advocate and true voice for agriculture,” Ernst said. “He has worked on agricultural policy at nearly every level of government.” Ernst and Grassley both stated the concerns raised by Cruz deal with issues that Northey will not even be involved with at USDA. Bill Northey, a farmer from Spirit Lake, was first elected as Iowa’s Secretary of Agriculture in 2006 and he won reelection in 2010 and 2014.