You are here: Home / News / More snow on the way for much of the state 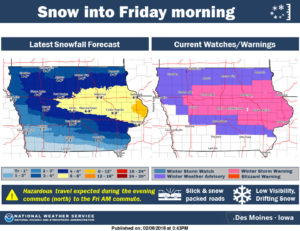 A wide section of Iowa that was buried under 5 to 10 inches of snow earlier this week is in line for similar snowfall totals by tomorrow morning.

National Weather Service Meteorologist Rod Donovan says snow that’s been falling across the state this afternoon will pick up in intensity overnight.

“And it’s certainly impacting a similar area as the event on Monday…we’re expecting our heaviest snowfall right across central Iowa,” Donovan said. While southwest and southcentral Iowa may only receive 1 to 2 inches of snow, 3 to 6 inches should blanket far northern Iowa. Higher snowfall totals are possible around Ames, Marshalltown, Waterloo, Cedar Rapids, Dubuque and Davenport.

“Snowfall amounts, especially within our Winter Storm Warning area – which encompases much of the Highway 20 and Highway 30 corridors – are expected to be in the 5 to 8 inch range,” Donovan said. The snow will likely lead to reduced visibility for motorists and create some slick roads. In addition, high winds are in the forecast.

“That is a little bit of difference between this event and the one on Monday – we will have a little more wind, especially going into tonight. Northerly winds of 15 to 25 miles an hour will cause some blowing and drifting of snow as we go into the morning communte tomorrow,” Donovan said. A weaker system is forecast to bring another round of snow, 1 to 2 inches, to southern Iowa late Friday night into Saturday.

There were dozens of traffic crashes around the state, killing eight people and injuring many others, during Monday’s snow storm. Donovan says road conditions could be even worse in this storm.