You are here: Home / News / Another round of snow heading for the state today and tomorrow 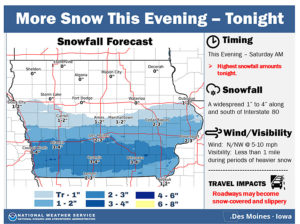 The third sizable snowstorm in five days is headed for Iowa. Meteorologist Cory Martin, at the National Weather Service, says a wide section of the state was walloped overnight with almost a foot of snow falling in some areas.

“The reports this morning show Fort Dodge anywhere from 9 to 11 inches, 7 inches in Webster City, 8.5 in Iowa Falls, 6 inches toward Waterloo,” Martin says. “We also had reports of anywhere from 3 to 6 inches just north of that area as well.” That was the first hit from Mother Nature’s one-two late-week punch. The next storm system should start dropping snow across Iowa’s southern half late this afternoon  and into Saturday morning, roughly from Interstate 80 south. It’s approaching quickly.

“That just leads to another tricky forecast,” Martin says. “In general, we’re looking at one to four inches with the highest amounts south of the Des Moines metro, from Creston over toward Ottumwa for the highest snowfall amounts out of this round.” Following Monday’s winter blast that blanketed many areas of Iowa with several inches of snow, Martin says some of us have had to shovel at least twice, maybe three times this week.

“Some of our observers around Pocahontas, Fort Dodge, Rockwell City, they’re reporting close to a foot of snow on the ground and we didn’t start the week with much of anything on the ground,” Martin says. “We’ve definitely had a real active week, especially up in north-central Iowa.” There are no warm-ups in the immediate forecast so those snowmen and snow forts will likely be sticking around for a while.

“Temperatures are going to stay near-to-below normal especially with all of this fresh snowpack on the ground,” Martin says. “It looks like, from a precipitation standpoint, things are going to quiet down considerably at least into the first half of next week.”

Get detailed forecasts for your area by visiting weather.gov.