You are here: Home / Fires/Accidents/Disasters / Four businesses destroyed by fire in Vinton 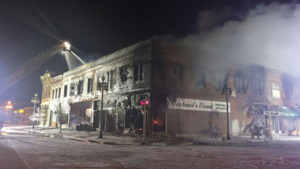 Vinton City Clerk Cindy Michael says the fire was fanned by high winds. “It started about 7:30 p.m. in the Michael and Dowd business, a furniture and appliance store,” Michael said. “It went to Clingman Pharmacy and then spread next door to the Fischer Law Firm offices.” That’s the private practice of Vinton city attorney Robert Fischer. The fire also spread to the Benton County Title Company.

The wind made things difficult for firefighters, as did the six-plus inches of snow that fell overnight and temperatures that dropped into the teens. Michael drove by the fire scene at 5:30 this morning. “There were icicles hanging from our ladder truck, where our firemen were up top with the hose…there were icicles hanging down from the bucket,” Michael said.

Fire crews from six departments battled the fire for roughly 10 hours. No one was injured. All of the buildings destroyed in the fire are several decades old. The Michael and Dowd furniture store has been at its current location for more than 50 years, but the business dates back to 1936. Clingman Pharmacy is one of two pharmacies in the town.

“La Grange Pharmacy is going to allow Clingman Pharmacy to come over to their building…and operate out of their building. So, that’s very nice,” Michael said.

There’s no word yet on what may’ve started the fire.