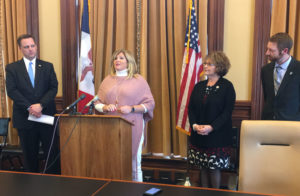 House Republicans release their plan for dealing with the opioid epidemic.

Republicans and Democrats in the Iowa House are promising to address the “very challenging” opioid epidemic.

House Speaker Linda Upmeyer, a Republican from Clear Lake, said there’s been an increase in overdoses from prescribed drugs as well as from heroin — the drug some turn to after becoming addicted to a prescription medication.

“This affects all socioeconomic groups and, as I think about it, I hardly can imagine a family in this state that doesn’t know somebody that’s suffered from this problem, either a friend or another family member,” Upmeyer said, “so we know it’s very destructive and we want to make sure we’re doing what we can.”

Republicans in the House have introduced a bill to address “doctor shopping” by forcing all medical professionals who can prescribe controlled substances to register all prescriptions on a state-run website. Only 45 percent of prescribers are registered to use the prescription monitoring program today. Representative Shannon Lundgren, a Republican from Peosta, said there’s been a “large reduction” in opioid prescriptions in the 26 states that already have this requirement.

“People facing substance abuse disorders because of opioids are our neighbors, our families and our friends,” Lundgren said. “…This isn’t a Republican or Democrat issue. This is an issue that faces all Iowans.”

Requiring digital rather than hand-written prescriptions that can be altered is also part of the House GOP plan. House Republicans plan to support a so-called “Good Samaritan” law that shields people who call 911 to report an overdose from prosecution if they are using drugs, too. However, Republican Representative Jarad Klein of Keota said the proposal will allow police to arrest people at the overdose scene who are felons or suspected of supplying the drugs.

“We wanted to make sure that the drug dealers weren’t able to use this as immunity — as a ‘Get Out of Jail Free’ card,” Klein said, “or those that are out there as repeat offenders cannot use the ‘Good Samaritan’ language to get out of jail free.”

Republicans outlined these ideas during a news conference Thursday afternoon. House Democratic Leader Mark Smith of Marshalltown also delivered a speech in the House on Thursday about the opioid crisis.

“I call on us, as a legislature, to address these issues in an aggressive manner before we go home at the end of this session,” Smith said.

Smith offered to join with the Republican speaker of the House to erase any procedural hurdles that otherwise would prevent on the proposals. Smith is also suggesting legislators need to provide more state money for substance abuse treatment programs.