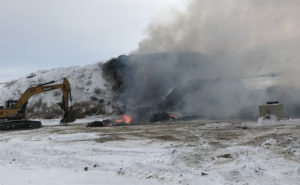 Fire at the Plymouth County Landfill.

“We attempted with an excavator that they have on site her to get to that fire and used our fire equipment to protect the excavator to try and pull the burning pieces out to get them spread out on the ground,” Schipper explains. Schipper says they determined it was too hard to try and get at the fire on the side where it was burning and need to come in from the other side with some more equipment. Schipper says it is important to keep the fire from spreading.

“This landfill is a quarter mile wide and it could burn all the way underneath across the whole landfill,” Schipper explains. He says the main focus was to protect the Plymouth County Landfill equipment as landfill staff assisted with the efforts to combat the fire. Schipper says firefighters were not only battling the fire, but the snow

and cold weather as well. Schipper has an idea of how the fire may have started. He thinks the fire started spontaneously as the fire is in an area of the landfill that has been untouched for at least two years. Schipper says they are awaiting word from the Plymouth County Landfill Board of Directors to determine their next move. He says there are also some environmental concerns that need to be considered.