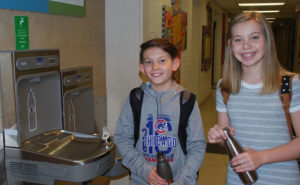 Through a program called “Rethink Your Drink,” qualifying schools are replacing old water fountains with bottle refilling stations that dispense fluoridated water. Jeff Russell is the president and CEO of Delta Dental of Iowa, which is sponsoring the effort.

“We’ve been working with 54 schools throughout Iowa in 26 counties to retrofit their water fountains into bottle filling stations so kids can fill up water bottles and drink water throughout the day,” Russell says. “As well, for these 28,000 students, we gave them each a water bottle and a toothbrush and a bookmark to remind them about the importance of drinking water.” Russell says Delta Dental has been involved in various projects over the years designed to improve the health and wellness of Iowans, but this is a new venture.

“This is the first time we’ve done the water bottle filling stations and it was a huge success,” he says. “We had 170 applications from around Iowa. We were able to fulfill 54 this time and we’re going to do another round of grant applications this year.” He says $100,000 was allocated for the program initially but there was such a demand, the company decided to spend $230,000.

“We were focused on schools that had a high percentage of free and reduced lunch students and that didn’t have a water bottle filling station,” Russell says. “Certainly, we wanted to also do those in communities that had fluoride in their water.” Studies find more than half of children and teens in the U.S. aren’t properly hydrated during the school day, which can impact cognitive function and energy levels.