You are here: Home / Health / Medicine / Bill would ban most abortions in Iowa after pregnancy’s 6th week 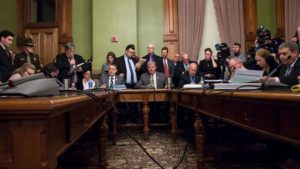 Republicans on an Iowa Senate committee have approved a bill that would make it a crime for Iowa doctors to perform abortions after a fetal heartbeat can be detected. Doctors could face up to five years in prison for performing an abortion after the sixth week of a pregnancy if the bill becomes law.

“The goal of this is to protect the lives of all Iowans, especially those most vulnerable who can’t speak up for themselves,” said Senator Amy Sinclair, a Republican from Allerton who’s guiding the bill through the legislative process.

Sinclair mentioned her son as she delivered a brief speech tonight during the Senate Judiciary Committee’s meeting.

“In this room with me tonight is an 18 year old man whose beating heart I could have chosen to stop,” said Sinclair, the only supporter of the bill to make remarks. “I think it’s a horrific reflection and a barbaric practice that could have been my choice and that young man could not have been here today to be a contributing member of our society.”

The bill passed the Senate Judiciary Committee with the support of all eight Republicans. All five Democrats voted against it. Senate Democratic Leader Janet Petersen of Des Moines was the only opponent to speak during the committee meeting.

“If your goal with this legislation is to jeopardize maternal health care for every woman across this state and especially women in rural Iowa, your bill will go just that,” Petersen said. “This bill is dangerous. This bill is unconstitutional.”

If the bill becomes law, there would be no exceptions for abortions in cases of rape or incest. The only way a doctor could perform an abortion after the sixth week of pregnancy in Iowa would be to save the life of the mother.

“It takes away a woman’s ability to get health care that is in her best medical interest,” Petersen said.

A new state Iowa law that took effect in May of last year bans nearly all abortions after the 20th week of pregnancy. The 72-hour waiting period for all abortions that was included in that law is under judicial review.