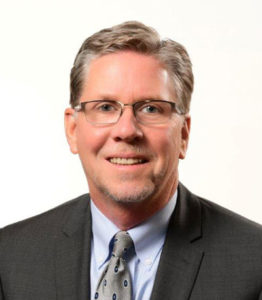 Cedar Rapids Mayor Brad Hart is in Washington D.C. today to meet with President Donald Trump. Hart says the governor was invited to meet with the president to discuss the state’s infrastructure needs, but she couldn’t make the trip and the Iowa Congressional delegation urge the White House to have someone from Cedar Rapids attend the meeting.

Hart took office in January, but is not worried about pitching the city’s story. “I’ve been to Washington, D.C. several times when we would go on lobbying trips with the Chamber of Commerce here, so I am not nervous about that,” Hart says. “Although I haven’t ever met the president….so I’m kind of looking forward to that.” Hart has a very specific agenda when it comes to infrastructure — for flood protection.

“I think that’s the only thing I am really going to talk about — is flood protection, because it is so important for Cedar Rapids.” according to Hart. “We’ve had 78 million dollars that have gone through all those steps for the federal government. It was part of the water bill — so it was approved — it just hasn’t been funded.” The money is part of the effort to rebuild and protect the city following the massive flooding in 2008. Har has a simple answer when asked what he’d like to come out of the visit to the nation’s capital.

“Well I hope I come away with a check,” Hart says, “I thought about doing a sit-in until he gives me a check….I hope that we have a real sense that they understand out need.” He believes Cedar Rapids can make a very good case for getting the money approved in the federal spending bill.

“I’ve heard that some percentage of the total is going to be reserved for rural areas or rural communities, but I don’t know what that means,” Hart says. “I would say that Cedar Rapids is an urban community in a rural state. I hope that helps us if there are those distinctions in the bill.”

Cedar Rapids City Manager Jeff Pomeranz is in Washington along with Hart and a small group of other mayors and officials.