You are here: Home / Education / Corbett says state support of schools in ‘a rut’ 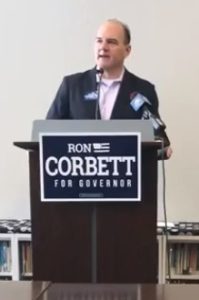 Governor Kim Reynolds this morning said a one percent boost in general state support of Iowa’s public schools is “just one piece” of what lawmakers ultimately will provide schools for the next academic year.

“Nothing is more important than investing in our children,” Reynolds said during her weekly news conference. “And that has been a priority since I’ve been a lieutenant governor and now as the governor.”

Ron Corbett, her Republican primary opponent, said Iowans should “expect more” rather than “settle for less” when it comes to the bulk of state aid for public schools.

“Have we lowered our standards that much in the state of Iowa that we think one percent is o.k.?” Corbett asked during a news conference in Cedar Rapids.

Corbett said as a conservative, he believes there’s room for improvement in public schools, but Corbett said improvement will be challenging when state funding doesn’t even keep up with inflation.

“Get out of this rut that we’re in,” Corbett said, calling it a “Reynolds rut” in his campaign news release.

Reynolds counters that in addition to a one percent boost in general state support, legislators are “looking at” giving schools state help in paying to transport students in geographically large districts. Reynolds also has asked legislators to extend $35 million that public schools have gotten before, but without legislative action that money won’t be available next year.