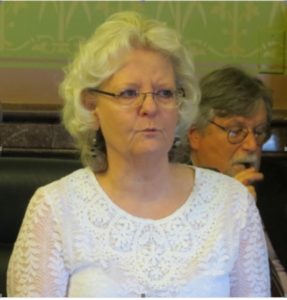 Republicans in the Iowa Senate are preparing legislation that would give new legal protections to Iowans who refuse services to customers for religious reasons. Iowa business groups warn the discussion could hurt employee recruitment and might prompt the NCAA to avoid Des Moines as a venue for tournaments.

A couple from Grimes who denied a same-sex couple the use of their business for a wedding testified today during a statehouse hearing on the bill. Betty Odegaard and her husband closed their wedding chapel rather than be forced to make it available to same-sex couples.

Representatives of Iowa business groups forcefully argued against the bill during the hearing. Tim Coonan of the Principal Financial Group said it paints Iowa in a negative light.

Others argued the bill would open the door to discrimination based on race, disability, sexual orientation or gender that is now barred by the Iowa Civil Rights Act.

The chairman of the Senate Local Government Committee indicated the bill has a strong chance of getting that panel’s approval this week.