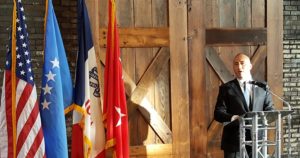 The Prime Minister of the Republic of Kosovo made a stop in Iowa just ahead of that country’s 10th anniversary of declaring independence from Serbia. “We are in our week of independence. (February 17) is the 10th anniversary and I’m happy, at the beginning of this week, I’m starting it here with you.” Prime Minister Ramush Hradinaj delivered those remarks Monday morning in downtown Des Moines.

Iowa and Kosovo have shared a sister state relationship since 2013. In January 2016, for the first time in Iowa’s history, an official foreign diplomatic office was opened in the state. The Consulate of the Republic of Kosovo is located in Des Moines.

Kosovo’s Prime Minister praised the partnership at an event hosted by Iowa Sister States and the Greater Des Moines Partnership. “This is something extraordinary. This is noble,” Hradinaj said. “I don’t know what in life can be…as noble as this.”

“We’ve had students who’ve gone over and spent the summer working at the American University in Pristina, getting experience of the Balkan region and understanding Kosovo. We currently have several high school students (from Kosovo) who are here for a year in a foreign exchange,” Orr said. “So, it’s everything from education to business to military exchanges.”

Orr will travel to Kosovo later this week to take part in the country’s independence day celebration. A larger delegation of Iowans plans to visit Kosovo in May.